This November, “The most important election of our lifetime”TM will take place. No – not that one. I of course speak about the election for the NH Liberty Alliance Director of Research.  Though clearly the opening statement is tongue-in-cheek, it is fair to say that the selection of board members for our organization is important not only to our members, but also to the prospects for long term liberty in the state.  According our bylaws, the duties of the Director of Research shall include, but not be limited to: bill review oversight; documentation of NHLA position on key legislative issues; developing the Liberty Rating for board approval; developing candidate surveys. I thought it might be worthwhile to discuss these duties in a little more detail to help prospective candidates for the role understand the nature of the position.

When we talk about bill review oversight, the first thing that comes to mind for most people is the technical expertise required read and understand complex legislation. In a typical year, nearly 1,000 bills will be generated that require review and the fact is that a majority of these are quite simple to read and often are only a few sentences or at most a couple of pages. While even apparently simple bills can have hidden underlying technical complexity, the truth is that the most challenging portion of this aspect to the role is not technical complexity but rather the effort required to coordinate the activities of a diverse pool of bill review volunteers. As luck would have it, this is also one of the more rewarding aspects of the role.

In 2020, at least 50 NHLA members volunteered their time to complete at least one bill review. Some completed just a handful of reviews while others pushed deep into double or triple digits for the number of reviews. Every one of these reviewers is volunteering a portion of their time to help the organization and advance the cause of liberty.  At times, there can be disagreements on positions in certain bills and a key portion of the role is to approach each of the inputs with an open mind and understand the perspective of the individual reviewers. Much is often made about the level of disagreement within liberty learning circles but over the years I’ve found that vast majority of our review volunteers are level-headed but passionate about their positions and it has been very rewarding to work with a group of such dedicated volunteers. Bill review season typically kicks off in December as the first pieces of text for the following year’s session start to appear in the state system and continues throughout the legislative season until ~June as bills are amended as they make their way through the process. 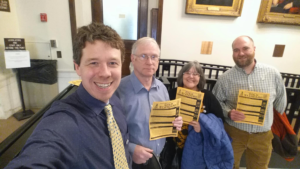 Ultimately, the inputs from the bill reviewers along with information from recorded or live witnessed public hearings and summary data from the legislative committees must be distilled into an NHLA position for each impactful bill and documented in the Gold Standard publication. Here again, you will be aided by a smaller core group of volunteers including current and former legislators to formulate the liberty position on key legislation.  Mentoring and training that of the bill review volunteers can pay off significantly each week as you work pull together a concise set of recommendations for each bill. This role typically requires weekly investment of time from about January through June. The NHLA has a great group of dedicated volunteers who distribute the Gold Standard each week at the state house (when sessions are run at the state house!) thus while having availability to go to Concord to support the distribution could be helpful, it is by no means a requirement of the job. The regular tempo during the legislative season can certainly be challenging but at the same time, this fast-paced work is also exciting.

As the season comes to an end, the position requires developing the Liberty Rating that scores legislators based on roll-call votes on matters that appeared in the Gold Standard. While the rating is the world’s easiest ‘open book test’ development of the rating is key as scores from the rating along with scores from the candidate survey developed by the Director of Research are key inputs to the Political Director to help determine endorsements in future elections.

Finally, any role in an all-volunteer organization ends up with a non-trivial portion of the effort falling into the “but not be limited to” category of the by-law role definition. While some tasking is very directly aligned with the role (e.g. supporting the political director and chair in the generation of the weekly activist alert heading into bill public hearings), other aspects may vary substantially based on the interests and amount of time that a person can dedicate to the position.

Ultimately, serving on a public-facing volunteer board is likely to be both more challenging and more fulfilling than you might initially imagine. It also is likely to help hone skills that will be useful in other aspects of your life. Most importantly, serving in a role like this can be one possible realization of a personal goal to apply the fullest practical effort toward the creation of a society in which the maximum role of government is the protection of individuals’ rights to life, liberty, and property.